As a very recent addition to the writing staff here, I feel a bit like I’m crashing everyone’s party. Nonetheless, I am pleased to have joined the ranks of such an august organization, and just tickled as shit to continue being a part of the broader metal community.

Intros out the way, then: Damn, was this a fine year for metal.  I don’t usually put much stock in the “Oh, this year was pretty shitty, but ‘member, back in them old days, how the sweet stuff used to flow like honeyed water?” routine, and this year’s tremendous output doesn’t look set to change my opinion.  These top twenty have been winnowed down from probably sixty or seventy albums that I enjoyed heartily this year, and I am wracked and panged by guilt at having left off so many beautiful children, but such is the way of the music critic.

Thanks for reading, and I look forward to banging my head with you, in the future, over the internet. Cheers!

1. AGALLOCH – MARROW OF THE SPIRIT

Friends, it really is as good as you’ve heard. When the epic tremolo blast-fest of “Into the Painted Grey” breaks down into a torrent of interlocking guitar lines, even the most ardent cynics should be convinced. It’s easy to pick outstanding moments on this album, but what makes it album-of-the-year worthy is that individual moments are completely superfluous; the album pulls the listener smoothly, insistently, unavoidably along an unbroken unity of texture and sound. By the time you reach the gorgeous crescendo of album closer “To Drown,” when those screeching guitars echo a line that sounds lived-in, comfortable, and familiar, backed by a majestic timpani-esque rhythm – will you know where you have heard this before? 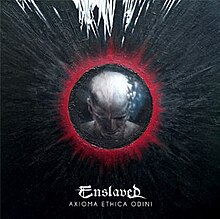 As one of the greatest shape-shifting bands in heavy metal, from their torrid black beginnings through their increasingly psychedelic progressive meanderings, Enslaved has gone down the rabbit hole and come out the other side. Without shaking the Floydian atmospherics of recent albums, Axioma Ethica Odini regains the more driving aggression of Isa, or even Eld. Swirling keys and clean vocals paint artful flourishes on the rock-solid canvas of unconventional riffing and straight-up ballsy heaviness. The ascending melody of “Lightening” would sound fey and forced in the hands of another band; capping this brilliant album, though, Enslaved has earned it.

Ludicra has an uncanny ability to write songs that twist and contort themselves in all manner of new directions but nevertheless make perfect sense. It’s like they’ve mapped all the synapses of the thinking metalhead’s brain, grabbed hold of the choicest few, and then used them as guitar strings to present these epic hymns to the grim realities of modern urban life. Equal parts furious and deliberate, melodic and desperately aggressive, The Tenant is Ludicra’s finest album in a string of already excellent albums. The fact that “Truth Won’t Set You Free” is one of the greatest songs of the year doesn’t hurt, either.

What on paper seems like an ill-considered marriage – Primordial’s Alan Averill doing vocals for the black/death barbarians from Axis of Advance and Revenge – turns out to be the year’s most dangerous record. The instrumental attack is razor-sharp, with each insane tom fill echoing the report of machine gun fire, and each maniacal guitar contortion splaying across the fretboard like white-hot shrapnel. Averill is clearly man of the match, though, deploying an array of diverse vocal styles to tell the tale of a religious zealot growing more stridently confident the further he alienates himself from society. A thoroughly contemporary album, then, and one which fans of artistic realism should not sleep on.

You can tick off your preferred traditional metal and NWOBHM influences all you like in describing Christian Mistress – your early Priest and Maiden and even Metallica, your Motörhead and Girlschool and Angel Witch and whatever else. The thing is, once Agony & Opium hits your ears, all it sounds like is brilliant heavy metal. End of story. Still, if you need more convincing, tell me that you haven’t had “Desert Rose” stuck in your head for days after hearing it the first time. Tell me that and I’ll call you a liar. This band has got chops for days, memorable songs, and a vocalist whose smoky pipes were born to front this kind of metal classicism. Get yourself out on a great desert highway in a convertible with the top down and play this album fucking loud.

Fuck your folk metal: this ain’t no back-slapping ale-fest, but a clear gaze fixed on a world found wanting. Rotting Christ have been on a peerless trajectory since Sanctus Diavolos, now even topping Theogonia by writing an album for the people. Aealo lives and breathes in a constant tension between achingly sad melodies and harrowing intensity, buttressed by a keening women’s choir. Featuring guest vocals by Primordial’s Alan Averill, and lead vocals by mistress of the Greek avant-garde, Diamanda Galás herself on a show-stopping cover of her song “Orders from the Dead,” Aealo nevertheless feels like the work of a community that knows the seething arc of thousands of years of history and lived experience.

7. SARGEIST – LET THE DEVIL IN

There must be something rotten in Finland’s water supply, because Finnish black metal knows how to get things done. Let The Devil In, on the face of it, is supremely traditional black metal – incessant tremolo-picked riffs, blasting tempos, and severely demented vocal rasps and shrieks. These classic black metal signifiers, however, in the hands of a superlative band like Sargeist, are turned into something refreshing and, oddly enough, jubilant. This album is tight, economical, and memorable, wasting absolutely no time with ambient filler or drawn-out dirges. The ferocious riffs actually toy with a depth of melancholy feeling that would make most “suicidal” black metal hang up their razorblades for good. Pure black metal got no better than this in 2010.

Having provided vocals for wonderful albums by Battle Of Mice and Made Out Of Babies, Julie Christmas strikes out on her own here, and in a mildly less heavy metal atmosphere, finds greater space to explore the strikingly broad range of her inimitable vocals. This is a woman who can go from the meekest, most vulnerable-sounding whisper-song to an inhuman wailing that slaps the listener in the face like a slammed door and a broken promise in two seconds flat. Things get a touch of the old heaviness on “Bow” and “When Everything Is Green,” but it’s actually the quieter moments that harbor the most menace, with “If You Go Away” making a serious bid for song of the year. Seek this out, ye fans of naked expression.

Like Tombs or Burst, Castevet’s astonishingly good debut draws from black metal, hardcore, and a healthy dose of structural experimentalism to produce compact epics of dense, emotionally draining metal catharsis. Imagine if you told Krallice to play Unsane, or Mastodon to cover early Satyricon. None of these comparisons tell the story of what Castevet sounds like, because their sound is at the same time classically-inspired and shockingly fresh. Check out four minutes into “Grey Matter,” when a guitar line buried in the mix thrashes its way calmly against the meter of the other instruments. This is a prodigiously talented band just beginning to flex their muscles, so consider yourself warned: The next one could be a world-beater.

Significantly less Stockholm-sounding than the already tremendous Folie Circulaire, Withered’s third album is a bulldozing monster of dense, hair-whipping riffs and dark ambience. Perfectly paced and sequenced, the album plays both like two classic LP sides and like an unbroken, 43-minute composition of grim intensity. The band still pulls lustily from death metal, black metal, sludge and dank doom in their whirlwind approach, but the songs never sound like a wobbly patchwork. “From Shadows” is a masterclass in galloping black magic, while “Aethereal Breath” rides a cresting wave of doom and suspense before bring the pure heavy metal hammer down on your stupid, worthless head. This band is hot, and mean, and coming to get you.

Happily committed to the foolish pursuit of words about sounds. Not actually a dinosaur.

This site uses Akismet to reduce spam. Learn how your comment data is processed.